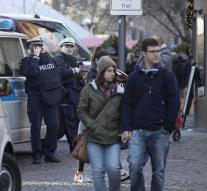 aachen - The traditional Christmas market in Aachen suffered Tuesday by the events in Berlin Monday. Exhibitors complained about disappointing visitors. They said they suspect that the terrorist attack in Berlin keeps people at home.

' Last year was a lot more people on the bone, 'says a saleswoman of handmade woolen bags and hats. ' Just before 'Weinachten' is traditionally very busy at the Aachen Christmas market. Now it's quieter pieces. ''

The weather can not lie, told a salesman fries. ' It is beautifully sunny and open again, '' he said. ' People are scared and stay inside. ''

Yet it was in comparison with neighboring Limburg Christmas markets quite busy. Three couples from Maastricht left undeterred by events in Berlin. Although the wife of one of the men had discussed last night still here with her daughter, we'll go, what do you think. ' But I told her, come on, let's go, '' said the Maastricht to wegwuivend who made a gesture. ' You have to let make you afraid. ''

A couple from Diepenbeek (Belgium) actually wanted to go to the Christmas market in Cologne. ' But when we saw what happened in Berlin on TV, but we decided not far to go home and it was Aachen, '' said the Belgian.

It was striking that many children running around in groups, to pale by school classes, including from neighboring Wallonia. But a Havo class from Volendam wandered all over the place for the town hall in Aachen. ' We are not afraid, '' cried the boys from class H3C at Don Bosco College in Volendam. ' I do, '' said a schoolgirl. ' The school informed but did not travel warning, 'says a boy. Whether they like it at Christmas? ' We had to, we had no choice, '' a boy smiling close the conversation off.\n  \n  \n   advertisement

The German police were now very explicitly present, and had all the access roads to the Christmas market closed at the town hall.