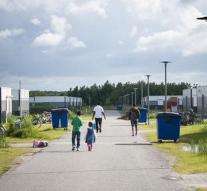 - In the first half of this year have applied for a total of 12 437 people for asylum in the Netherlands. That's two thousand less compared to the same period last year.

These figures from the Immigration and Naturalisation Service (IND) contain both first asylum applications, repeated asylum applications as the number of nareizende family members who come to the Netherlands through family reunification.

Typically, with the figures from last year is that the inflow peak lay in winter rather than in summer. In the record year 2015, the large flow of migrants and refugees in the summer came highly underway. Shortly before smugglers discovered literally a hole in the market at the Greek islands.


The illegal smuggling route through Greece and the Balkans, was only brought to an end after the last winter. Since then, the number of new asylum seekers plummeted in the Netherlands. In June, the number of applications rose again slightly; 1020 new foreigners have been reported to the IND.

The perilous smuggling route through Italy is still a daily problem. The impact appears limited in the number of asylum applications. Two hundred new asylum seekers come from North African countries and other parts of Africa.

Data from the UN refugee agency UNHCR shows that groups of refugees and migrants who formerly Europe via Turkey trying to enter not in droves to travel to Italy. This particularly concerns Syrians, Afghans and Iraqis.