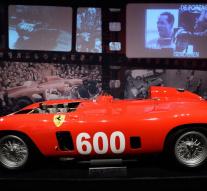 The racing car ever designed for Juan Manuel Fangio. This in 1995 deceased Argentine racing legend was five-time champion in Formula 1. In addition, other well-known drivers like Phil Hill and Wolfgang von Trips drove in the Ferrari.