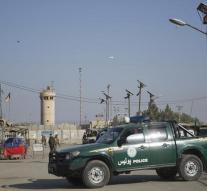 kabul - Five female security officers and their driver were killed Saturday in Afghanistan. This was done according to the BBC when two assailants on a motorbike opened fire on the van to the victims to work reason.

The women were on their way to the airport in the city of Kandahar. Since their work consisted of checking female travelers. The attack has not been claimed.