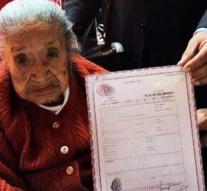 - Trinidad Alvarez Lira received this week with pride the birth certificate she had been waiting for years. The Mexican woman has not, however, enjoy long, she died a day later.

The woman was born in 1898, but could not prove for years that she was probably the oldest person in the world. And she wanted to prove she was just less than 117 years old, so they would get a higher benefit.

Last week she was finally told that the evidence had been approved, they would get more financial support from the government and retroactively receive a sum of money. Here she was able to spend a dime; she died Wednesday of a heart attack.