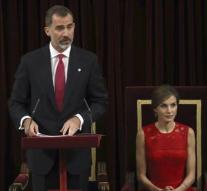 - The Spanish royal couple attended the solemn assembly in Madrid in the parliament building, Palacio de las Cortes, in celebration of the 40th anniversary of the first democratic elections after the Franco dictatorship.

These elections took place on June 15, 1977 and Spain has formed as it is now, said King Felipe in a speech to the united assembly of House of Representatives and Senate. He quoted the words of his father, King Juan Carlos, at the opening of the then elected parliament: 'The democracy has begun. ''

The task of the current parliament is also to consolidate democracy, according to Felipe, who expressed his deepest gratitude, honor and admiration for the previous generations who had struggled to make Spain a democracy. Stilstand by June 15, 1977 also meant to account for the period preceded by times of violence, coups, war, restriction of freedom and hostility between citizens. 'It was a turbulent and uncertain era.'

The then elected parliament united Spaniards of different descent and generations, with different views and convictions, sometimes returned from exile, but with one goal in mind: intolerance and exclusion had to disappear, replacing dogmatism with respect for the views of others.

From that moment on, Felipe said, 'the Spaniards began to enjoy citizenship of their own civil, political and social rights, through a democratic regime guaranteeing pluralism and political change through free elections. '

Felipe also made a personal reminder in his speech. 'On June 15, 1977, I was only nine years old. Like many other children and young people in our country, I was not fully aware of what happened in Spain, but I felt the intensity of the moment. '

After the ceremony, king and queen in the parliament building opened an exhibition about forty years of democracy. Spain holds the celebration for a year, because next year, the first democratic constitution in the post-Franconian era will also be forty years.