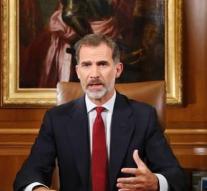 - King Felipe received a lot of criticism after expressing himself in spoken words on Tuesday's independence wish of Catalonia and the resulting crisis in Spain. There was support from hardcore monarchists and government party Partido Popular, who welcomed the king's reaffirming the indifference and unity of Spain.

The rejection, of course, came from Catalonia, but also from the left-wing opposition that portrayed him. 'As a leader of a party for whom five million Spaniards voted, I say to the unresolved king: You do not speak in my name,' said Podemos leader Pablo Iglesias. His colleague Miguel Urban Crespo added: 'For those who did not know, the king is part of the problem. '

'No solution. No word about the injured. No call to dialogue. An irresponsible speech, a head of state unworthy, 'said Mayor Ada Colau in a response to the nationally-spoken speech, which was watched by twelve million Spaniards, but for which, in Catalonia, little attention was paid. 'Am I deaf or it's true that I did not hear the king say the word dialogue,' said Catalan journalist Lorena Vazquez.

King Felipe was even criticized by his in-laws. 'The king is beaten right in Catalonia, right-handed,' said an outraged Henar Ortiz Álvarez, a very pronounced and critical aunt of Queen Letizia.