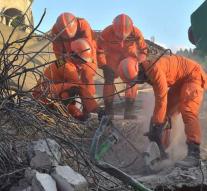 jakarta - The authorities in Indonesia fear that the death toll due to the earthquake Sunday on Lombok, which has certainly claimed 98 lives, will rise further. Care workers suspect that there are still many people under the rubble.

In the search for people who have been missing since the earthquake, excavators and other heavy equipment are used. The BNPB disaster prevention agency reported that at least 13,000 houses were destroyed by the Sunday earthquake. The earthquake had a force of 6.9. The epicenter was almost 30 kilometers northeast of Lombok.

Landslides have occurred in areas near the epicenter. A bridge has also been destroyed. This makes it more difficult for aid workers to reach those regions.

The main hospital in the north of Lombok is in the city of Tanjung. That has been badly damaged by the earthquake. Employees therefore have beds set up under the trees and in a tent for people who have been injured by the natural disaster.