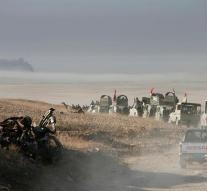 baghdad - Approximately 1.5 million inhabitants of Mosul are in great danger, now the Iraqi army and its allies have launched an attack in the northern Iraqi city. The UN refugee agency UNHCR expects about one million people will try to flee the city.

' Of those million would certainly 700. 000 people may need humanitarian assistance, '' said Stephen O'Brien, relief coordinator of the UN on Monday. ' Especially families are at great risk. Tens of thousands could be used as a human shield. ''

The military operation to retake Mosul to the terrorist movement Islamic State started in the night from Sunday to Monday.