Home / World / Fear of many deaths after bus crashes India 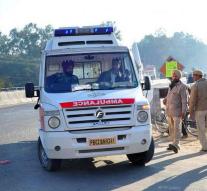 new delhi - Certainly seven people were killed in the state of Himachal Pradesh in northern India, when two buses and a number of smaller vehicles were surprised by a landslide on Sunday. That reports local media.

So far, five people have been saved from debris. The vehicles are buried under the rubble. The rescuers fear that the death toll will rise to over fifty. The authorities have started a major relief operation.