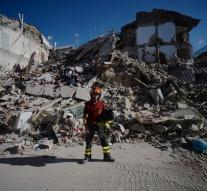 - Local authorities expect the death toll (247) of the earthquake in the coming hours and days will increase east of Rome. Approximately 270 wounded victims were admitted to hospital.

Among the debris in the four worst affected places (Amatrice, Pescara del Tronto, Arquata del Tronto and Accumoli) Searching desperately for survivors. The owner of a collapsed hotel in Amatrice said to fear Thursday that some of his guests is still buried under the rubble. His hotel had at the time of the quake about seventy guests. The hotel owner thinks about thirty guests put themselves ahead of time to safety. The bodies of seven residents are safe.

The quake Wednesday a magnitude of 6.2 and struck a mountainous area 140 kilometers east of Rome. Afterwards there have been dozens of aftershocks.