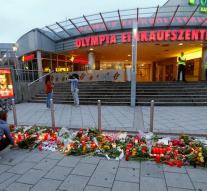 - In government circles in Berlin is feared that the recent attack of a seventeen year old Afghan asylum seeker on people in a train to Würzburg and the massacre perpetrated Friday by an eighteen year old student in Munich inspires more troublemakers to take action.

The Süddeutsche Zeitung wrote Saturday that there are concerns that inhibitions that people with tendencies to shocking acts of violence by the loss of major international media interest followed crimes of 18 and 22 july.

At Würzburg cut a seventeen year old Afghan or Pakistani refugee Riad Khan Ahmadzai, a knife and an ax on rail passengers. He carried jihadism as a motif and shouted Allahu Akbar, shortly before he was shot dead by the police.