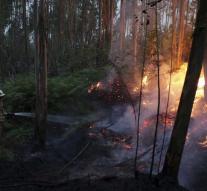 hilde postmalisabon - The mighty wind in Portugal, which has been the worst forest fires for decades, causes fierce moments in the vicinity of Pedrógão Grande. Also with the Dutch Astrid Schipper, who settled in the area half a year ago.

Then she bought a house with a lot of land to grow her own food in a biological way. The fire that broke out is now also very close to her in the neighborhood, she sees the blushers over her circles turning and monitoring the environment.

Last night was 'a night from hell', she says. 'Very big fires broke out 35 kilometers away from my house. Because there were very strong winds in our direction, I was very afraid that the fire would skip this side. Then there was a fire in the village next to me! And by the wind, which changes continuously, there were burning leaves on my porch's veranda. '

Fortunately, that went well. 'I used the kiln and water pump on my land for hours to keep the land wet and I used the municipal water to keep my roof wet. I'm going to get a huge first water bill! With me, everything is good, the helicopters are now turning rounds above our area, they are in superior condition of preparedness. The idea that there are people who have ignited these fires makes me nauseous. '

There have been 43 deaths now, and around 60 in the fire in the center of Portugal. Among the injured are some firefighters who tried to extinguish the fire.