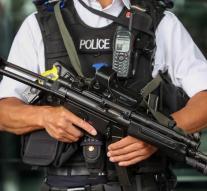 london - Central London on Tuesday at the end of the afternoon evacuated after reports of a possible bomb. According to some British media is a gas leak, the reason for the eviction. Hundreds of people have been brought to safety.

The security services in Europe are on high alert after the attacks of recent times. Tuesday morning was beheaded a priest in Normandy by two members of IS. Sunday blew an IS-warrior located at a music festival in the German town of Ansbach.