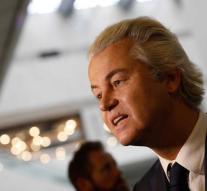 - To cause 'anger, dismay and helplessness in tens of thousands of families,' some forty Moroccan Dutch claim 500 damages per person from PVV leader Geert Wilders.

This compensation is 'quite reasonable', their lawyer Göran Sluiter argued Monday at the Judicial Complex in Badhoevedorp Schiphol, where the trial against Wilders is due to its 'less Marokkanen' statements.

Sluiter was referring to an earlier ruling in Den Bosch, where a café-goer refused on grounds of discrimination had received 250 euros compensation. 'These facts are more serious,' Sluiter said about his higher claim for damages. According to him, there is talk of a sustained damage, 'for continuing the feelings of anxiety last. 'He brought further forward Wilders following his statements' it has nothing reversed. '