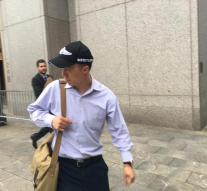 - A former FBI employee has debt Monday in front of the court confessed to passing on sensitive information to China in exchange for prostitutes, money and expensive hotels.

The 46-year-old Kan Shan Chun, who also called Joey, can look forward to a term of imprisonment of ten years. He was arrested in March by the FBI, where he worked since 1997. His lawyer reports that the American of Chinese descent regrets and the US never intended to harm.


The FBI began an undercover operation against Chun in 2015. The secret agent told Chun that his contacts in China prostitutes paid for him and his parents gave money. He played in return include an organizational structure and details about surveillance techniques by the FBI.