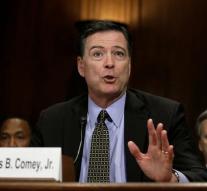 washington - FBI director James Comey has announced his reasons for informing Congress about reopening of Democratic presidential candidate e-mails for Democratic presidential candidate Hillary Clinton Wednesday. He announced that decision two weeks before the Americans went to the polls. Comey said, according to The New York Times, that the suggestion that he had the result of the election had made him 'lightly unfair'.

Comey explained for the first time in public about his trade that caused the necessary turbulence in the final phase of the election campaign. The FBI boss said he had sought publicity on October 28 because he believed his agents had discovered e-mails that could give insight into Clinton's reason to use a private server.