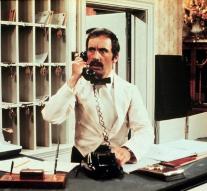 london - The German-British actor Andrew Sachs, famous for his role as Spanish waiter Manuel in the television series Fawlty Towers, is deceased. His family confirmed the death, the BBC reported Friday. Sachs has been 86 years.

Sachs died last week on November 23 and was buried last Thursday, as confirmed his widow opposite the Daily Mail. He suffered according to his wife four years from dementia.

The actor, born in Berlin and Andrew Sachs, played from 1959 to 2008 in dozens of television series and movies. He became known worldwide for his role as the waiter Manuel in Fawlty Towers alongside John Cleese.