Home / World / Father victims Munich: I live in a nightmare 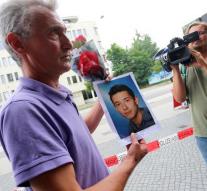 - Dijaman, the 21-year-old son of Naim Zabergja, is one of the nine victims who did not survive the shooting in Munich. The boy stood just two meters away from the gunman when he opened fire.

'Dijamant and his friend just had a drink bought that they would drink outside. They took place just two meters from the shooter when he suddenly opened fire. Escaped his friend, but Dijamant was killed,' Naim told Zabergja to the Daily Mail.


In the shooting Friday night were a total of seven teenagers were killed. The other two dead were adult. The gunman, a 18-year-old German Iranian, took his own life.