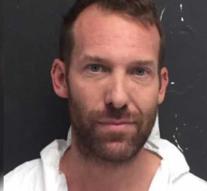 melbourne - Although his children beg to stop, an American father shot his wife before the eyes of their offspring. Her parents were also under fire.

According to police, the shooter, William Brian Stillwell, discovered a sex tape from his wife and his best friend a few days earlier. Detectives heard that he 'discovered the video on her phone.' Stillwell (39) called his wife a 'whore' to the police.