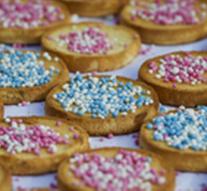 toronto - A 46-year-old Canadian has abandoned his wife and seven children to start a new life as a six year old girl.

The 46-year-old Stefon Knee (pronounced Stephanie) Wolschot was married for 23 years when he realized that he was transgender.

Now she is living with an adoptive family and she says she will not mature. " I can not deny that I was married and have children. But I've moved on and went back to being a child ", quotes the British newspaper The Independent, which shows a picture of Wolschtt with a big pink bow in her hair.

Wolschot now plays with the granddaughter of her new parents. " We have a lot of fun. We color and do kid stuff. It's called play therapy. No medication, no suicidal thoughts. And I can just play. "

When her eldest daughter was getting married in 2012 Wolschot might come, but " dressed as father ".