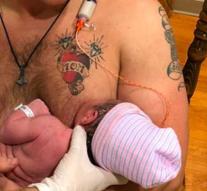 - Most fathers are a bit on the sidelines during the delivery, but this was not the case for the American Maxamillian. After an exciting delivery, he gave his brand new daughter breastfeeding.

It was a heavy birth for mother April. She suffered from high blood pressure and pregnancy poisoning. When daughter Rosalie came into the world, April was immediately taken away to be treated.

Maxamillian had his daughter pressed in his arms for a skin-on-skin moment. Little daughter Rosalie was safe with her dad, but also had to be fed. 'The sister asked me if I might want to take a nipple. I like joking, so I thought that was something ', the father tells BBC News.

A bottle of milk was attached to the nipple and attached to Maxamillian's chest. 'I had never breastfed before and did not think I would ever do that in my life', says the dad.

Maxamillian's mother-in-law did not believe her eyes when she entered the hospital room and his father also had to get used to the idea, but Daddy thought Max was wonderful. 'I felt a huge connection and a strong bond with my little girl. 'He shared a picture of the wonderful moment on Instagram.