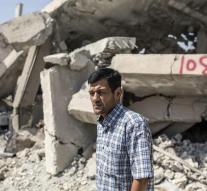 berlin - The pictures of the drowned three years vluchtelingetje Aylan on a Turkish beach last year caused widespread disgust. His father Abdullah Kurdi said Thursday in the German newspaper Bild that since then not much has changed for the refugees.

'Politicians said after the death of my family: never again. All they wanted to do something obvious because the picture was so touched them. But what happens now? The dying continues and no one does what, 'said Kurdi.

The Syrian lost his wife and two sons when he was in early September with his family by sea fled from his homeland. He now lives in Erbil in Iraq. 'I can images that remind me of our horror, barely standing. How is it possible that these dramas ever take place again? '