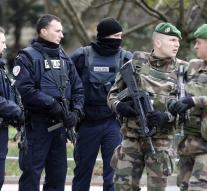 - The father and the brother of one of the suicide bombers of the tereuraanslagen in Paris were arrested Saturday night.

That happened after raids by police in the city Romilly-sur-Seine, in eastern France. According to a French journalist are the parents of the terrorist " highly respected in their neighborhood ".

It would be relatives of one of the terrorists who sowed death and destruction in Bataclan theater, a 29-year-old Frenchman from Courcouronnes. He has several convictions on his record, but had not previously been in the cell. He was able to be identified on the basis of his fingerprints.