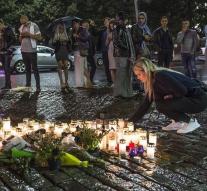 turku - The suspect of the deadly sting in Finland Turku is an 18-year-old Moroccan.

This said the Finnish police Saturday calling the terrorist party a terrorist act.

The police shot the prisoner on Friday in Turku, which had killed two Finnish passers by a knife. One died on the spot, the other in the hospital. Among the eight injured are two Sweden and one Italian. The perpetrator who got a bullet in his leg was arrested.