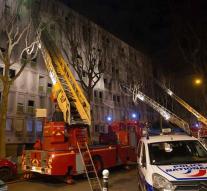 paris - A large fire in a residence for foreign workers in a Paris suburb on Friday demanded a life. According to French media, the police found traces in the hall of the building in Boulogne-Billancourt indicating arson. A resident is suspected that he had started the fire.

The victim is an immigrant from Mali in their forties. He fell or jumped from a window after the outbreak of the fire. Prime Minister Bernard Cazeneuve has expressed on Twitter his condolences and promised thorough investigation.