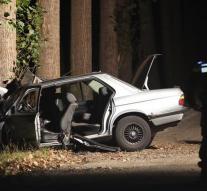 - Sunday night is a 31-year-old motorist from Schijndel deceased after he drove into a tree. The accident happened around midnight at the Mart Mans Hurk in Schijndel.

The motorist collided presumably against a pole indicating a narrowing of the road. The victim thus lost control of the car and slammed into a tree.

As a blessing in disguise, there were also no other drivers involved in the accident. Emergency services arrived on the spot, but help to no avail. The ambulance was deployed.