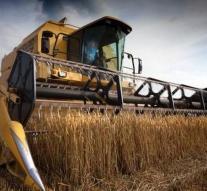 the hague - Most of the more than 106,000 millionaires in the Netherlands are from the agricultural sector. Statistics Netherlands counts their number at 12,900, including dairy farmers (6100) and farmers (3300). An estimated 10,900 millionaires gained their financial services capabilities.

There were around 500 millionaires in 2015. Thanks to a new and more reliable calculation method, Statistics Netherlands notes that the number of households with a capital of 1 million euros or more (excluding the home) has grown to 106. 200. There are 500 more than in 2014. At that time, Statistics Netherlands still out of almost 108,000 millionaires, but by improved calculations, that figure of 2014 has been adjusted downwards to 105.700. Since 2007, the number of wealthy Dutch people has grown annually; nine years ago, nearly 80,000 people owned more than one million euros.

'There is still growth in the number of millionaires,' said chief economist Peter Hein van Mulligen of the CBS. In 2007, their number was almost 80. 000. According to Van Mulligen, the ability of entrepreneurs in the agricultural sector is mainly due to the ownership of land and estates.

Five municipalities host most millionaires: Laren (NH), Bloemendaal, Blaricum, Wassenaar and Rozendaal. Of all provinces, most millionaires live in Zeeland: 1.8 percent. Limburg, Flevoland and Groningen accounted for 1 percent of the households, the smallest millionaires.