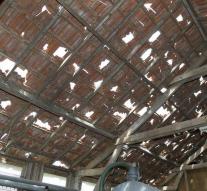 luyksgestel - Eight farmers from the area of ​​Luyksgestel and Someren go to court because the damage they sustained during the violent hailstorm late June is not reimbursed by their insurer Achmea, Interpolis. Reported BN De Stem.

Achmea, Interpolis designates the storm of June 23 as hail, not as storm. Therefore, the farmers, who have no special hail insurance, forget about their money. They want to prove to the court that indeed there was storm, which would have to pay the insurance yet. The case comes on October 25 before the court in Rotterdam.