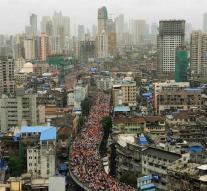 mumbai - Hundreds of thousands of protesters held a protest march in Mumbai on Wednesday. The protesters, mainly farmers, from the Maharashtra province went up the street with orange flags to demand better opportunities for higher education and government jobs, local media reported.

Due to the 5 kilometer protest march, approximately four hundred schools had to close the doors on Wednesday. According to the police, the demonstration continued quietly. The organizers of the protest claim that about 2 million people participated. The police hold it at about 300,000.

The protesters belong to the Maratha caste, a former warrior who now works mainly in agriculture and is poor. They also demand a guaranteed number of government jobs and admissions at universities for their population. Such quotas are for lower cabinets and other disadvantaged groups, but not for the Marathas. Rising unemployment and aging agricultural income are an ever-increasing problem throughout India.