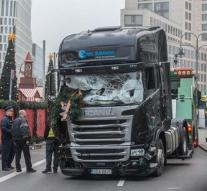 banie - Hundreds of people on Friday attended the funeral of the Polish truck driver Lukasz Urban, one of the twelve died victims of the bloody attack on December 19 a Christmas market in the center of Berlin. The attack committed with Urbans truck, in the Middle East, claimed by the terrorist group Islamic State.

Lukasz was 37 years old and leaves his wife and seventeen-year-old son after. He is at the expense of the state buried in his village, Bani, not far from the German border. Among those present was the President of Poland Andrzej Duda. At noon stopped throughout Poland truck and honked to commemorate Urban. Numerous trucks pulled into Banie.

Urban was found dead in his truck after it was driven into a crowd by the Tunisian hijacker Anis Amri. In addition, eleven people were slain. There were indications that the driver resisted the hijackers, while being shot.

A British truck driver has already collected more than 200 000 euros for the widow Zuzanna Urban and son Adam. Polish truckers have also started a fundraising campaign.