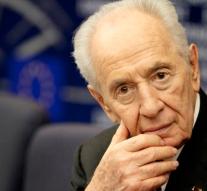 jerusalem - Former Israeli president Shimon Peres and Prime buried Friday at the national cemetery on Mount Herzl, on the western outskirts of Jerusalem. That is the part that is intended for ' great leaders of the nation. \' Peres was one of the founders of Israel. The funeral procession from downtown Jerusalem to the Mount Herzl leaves at 09:30 (Dutch time).

Peres died in the night from Tuesday to Wednesday at the age of 93. He arrived in 1934 as a child of eleven, to Palestine and was one of the founders of the State of Israel was proclaimed in 1948. Since then, Peres played in a variety of functions, such as diplomat, minister and prime minister, a crucial role in the politics of Israel and the region. He was awarded for his efforts to achieve peace with the Palestinians Nobel Peace Prize in 1994

The interest from home and abroad for his retirement is great. Among the leaders attending the funeral were the Spanish King Felipe VI, US and French Presidents Obama and Hollande, the British Crown Prince Charles, former US President Bill Clinton and former prime ministers Blair and Cameron of Britain. Prime Minister Rutte represents the Netherlands.