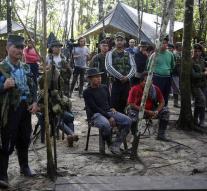 bogota - The Colombian guerrilla movement FARC has already given its fighters ordered to lay down their arms definitively midnight local time. The cease-fire put an end to the 52-year war against the Colombian government. About the peace agreement, both parties negotiated four years in Cuba.

,, The long war against the state is over, 'said FARC chief Rodrigo Londoño, alias Timochenko. The official signing of the peace agreement will take place in the week of 20 to September 26.

Colombia holds an October 2nd referendum on peace with the guerrillas.