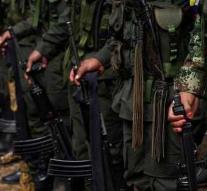 bogota - Two former fighters of the Colombian FARC were killed after campaigning for a political candidate of the movement.

A peace deal in 2016 put an end to more than fifty years of violence between the FARC and the government. Thousands of members handed in their weapons. The movement now wants to participate in elections later this year and campaigns for this.

The two led an election meeting to support the local candidate for Antioquia when they were shot, according to a statement from the FARC. The Ministry of the Interior announced that it would investigate the incident.