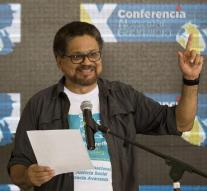 - The guerrilla organization FARC has asked forgiveness for one of the worst massacres in Colombian history.

FARC commander Iván Márquez handed the inhabitants of the village Bojayá Thursday (local time) a black Christ Statue as a symbol of reconciliation. \'We will never do more such terrible damage,\' the chief promised.

During battles with the paramilitaries in 2002, a bomb exploded by the rebels in the church in the village Bojayá which the villagers verschuilden. In addition, 79 people were killed and over a hundred people injured.

The FARC and the Colombian government signed Monday (local time) a peace treaty.