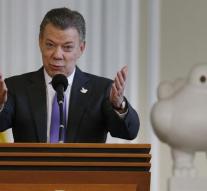 bogota - The Colombian government and the FARC Marxist signs Thursday again a peace agreement. That President Juan Manuel Santos announced Tuesday (local time). The agreement must still be approved by the Colombian Congress, but the end of the 52-year civil war seems still in sight.

On October 2, a previously agreed by the population voted in a referendum, because it would work out to benefit the rebels. The amended contract will be signed in the capital Bogota by FARC leader Rodrigo Londono and President Santos. The latter won in early October still the Nobel Peace Prize for his efforts to end the conflict with the rebel group.

The conflict kept Colombia more than a half-century in his grip and led to the deaths of more than 220 000 people. In addition, millions of people were displaced in the Andean country.