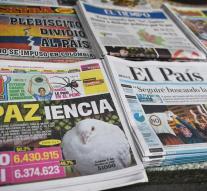 - The Colombian government and the Marxist guerrilla organization FARC have returned Tuesday to the negotiating table in Havana. They signed last week the peace agreement, reached after four years of difficult discussions, but Sunday was painfully rebuffed by the population. A small majority rejected the treaty into a referendum because the conditions were too mild for FARC members.

That was an unexpected dramatic turn for both President Juan Manuel Santos as the rebels, who were prepared after 52 years of war to lay down their arms. Both parties were agreed that peace must finally arrive in Colombia. now they try to Cuba to break the deadlock and find a solution that is acceptable to everyone. The cease-fire in the South American country holds so far stand.