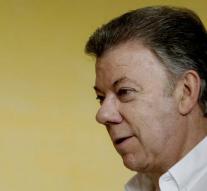 bogota - To the great satisfaction of Colombian President Juan Manuel Santos, the FARC guerrilla movement has handed over 30 percent of its weapons arena to the United Nations. 'An historic day,' Santos responded to the further demilitarization of the rebels.

In total, FARC has now delivered 60 percent. 'Peace is built up a little bit, as you build a cathedral stone for stone,' Santos said. The president would attend the surrender ceremony Tuesday, but was adjourned by the bad weather, reports the BBC.

FARC and Colombia concluded an agreement last year that ended 52 years of war. Around the 6800 rebels are located in special zones where they are demilitarized. They wait there when they can return to society. The guerrilla movement has until 20 June given the time to hand in all weapons and then continues as a political party.