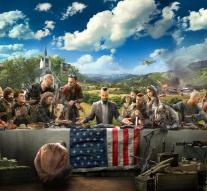 - Players travel for the first time in the Far Cry series to America and explore solo or in coop the calming but insane world of Montana. There they try to survive and fight for freedom. Far Cry 5 is available from February 27th.

As a new junior helpless hero of the fictional Hope County in Montana, the plans of a fanatic doomsday sect, the Project at Eden's Gate. Believer and shielded from the rest of the world, players join forces with residents of Hope County and resist them.

The battle brings players to unique locations in Hope County, which offer different gameplay experiences. Players control during their trip among other aircraft during air combat with sect members over Big Sky Country. When detecting sects and collecting survivors, players travel through fields, forests, mountains and rivers, and crawl behind iconic muscle cars, ATVs, boats and more.