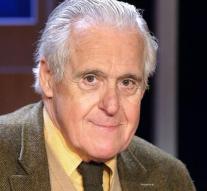 paris - The famous French restaurant critic Christian Millau died at the age of 88. That made the culinary magazine Gault \u0026 Millau known on Monday.

Millau journalist started a magazine in the late 1960's with his colleague Henri Gault in which leading restaurants were reviewed and written about food and drink. Over the years, their judgment was considered increasingly important in the world of haute cuisine.

The duo introduced the concept of 'nouvelle cuisine' in the 1970's, which involved a new way of cooking, which featured a simpler way of preparing and using only fresh ingredients. The layout of the board was also central to this Critics of the close cuisine complained about the small amount of food on the plate.

The judging system that used the duo has been a fierce competitor of Michelin's star system for decades. Restaurants can score up to 20 points in the system. The Dutch chef Sergio Herman of former Oud-Sluis restaurant, in 2009, became one of the few in the world who rated Gault \u0026 Millau's maximum rating.