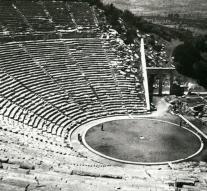 athens - Scientists have hard-handed a well-known allegation about ancient Greece. The centuries-old acoustics in the theaters are, according to researchers, a myth. There is little of the assertion that at the cheapest places, at the top of the theater, any whispered word of the actors could be understood.

The oldest theaters date from the sixth century BC. Throughout the ages, enthusiastic theater and scientists have claimed that you could hear the pin in every scene in the theater, the Guardian wrote.

Scientists from several countries, including Constant Hak of Eindhoven University of Technology, conducted tests. They used to be in the best-preserved theater, Epidaurus that hosted 14,000 spectators, twenty disseminated microphones. They made 2400 recordings of speakers that produced high and low tones, as well as dropping a coin and human whispering. The whispering reached only the front rows below, the coin did not go beyond half of the seats.