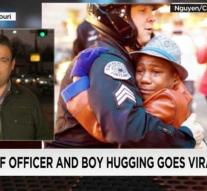 mendocino - A family with six children drove from a cliff in the US state of California and ended up in the sea after a fall of about thirty feet. According to CNN, the police assume that all passengers have died, although the bodies of three children have not yet been recovered.

According to the news channel one of the occupants is Devonte (15). He became world-famous when a photograph of him, taken during a Ferguson protest in Portland, went viral. In the picture he gives a cop a hug.

The SUV, with two women and their six children between the ages of nineteen and twelve, drove into the abyss along the coast in Mendocino County, north of San Francisco. A passerby saw the car lying in the water a few hours later. According to the sheriff, the occupants did not wear a seat belt.

How the car got off the road is not known. No brake marks were found. The sheriff, however, says he has no reason to start from a deliberate action. He keeps a small hope that the three missing children were not in the car after all.