Home / World / Family escapes Irma, is hit by roving in Mexico and has to flee for Katia 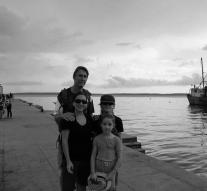 mexico - The Belgian-Argentinian Geerts family has gone on world-wide since the end of July, with unimaginably high setbacks. The family was first in the Caribbean, but could escape for the devastating Hurricane Irma. The family fled to Mexico, but is now in the midst of an earthquake area, where they can not cope with that other hurricane, Katia.

Kris Geerts travels with his wife Analia and children Belén (7) and Santiago (9) around the world until next July. The trip started in Cuba, where they were about a month. When Hurricane Irma became known, she decided to travel further. Because the hurricane approached and that Harvey was in the vicinity, the family could feel good. 'I went to Remedios to the bakery and was in an hour's time enclosed by the heavy rainfall. The streets were under water. Our children even swam, 'Kris told Belgian media.

Kris Geerts travels with his wife Analia and children Belén (7) and Santiago (9) around the world until next July. However, the start of the journey is not as planned...\n    \n   \n     Photo: Family Geerts

The family decided to travel to the Mexican city of Puebla. But there they were awakened this week by the huge earthquake that hit Mexico. 'At midnight the earth suddenly trembled. They were very shocking. We immediately left our room with our children. The lamps swung swiftly back and forth. Fortunately we are unharmed, but we are very upset. '

Kris and his family are now facing a difficult dilemma. 'We initially wanted to go to Veracruz, a coastal city on the Caribbean Sea. But then we would go to the hurricane. That was not an option. Also southward can not be because it is closer to the epicenter of the earthquake, where the aftershocks are even heavier. 'Staying in Puebla is also not an option. Because another hurricane is expected, Hurricane Katia. 'By Saturday this would fall 250 mm / m², along with heavy winds and there is a risk of floods. '

The family will probably take it by car and take the bus to the south. 'We can not wait for too long, because the bus trip is no longer safe due to the rainfall. '

Do you want to follow the Geerts family? Which can. They keep a blog about their world trip.