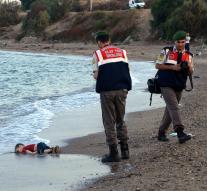 vancouver - Family of the Syrian Kurdish boy Aylan, whose remains on a Turkish beach shocked public opinion in many countries will be living in Canada. Canadian media reported Friday that a Canadian aunt Aylan, Tima Kurdi, has announced that her brother Mohammed arrives with his family quickly in Canada and comes to live with her ​​. Canada takes over as the new prime minister Justin Trudeau fulfill his election promise to end the year 25 000 Syrian refugees.

Mohammed and his brother Tim and sister of Abdullah Kurdi, the Kurdish- Syrian father Aylan. He lived in Istanbul and wanted his family to Canada. When legally not seemed to work, he took the illegal crossing to Greek islands and that ran dramatically. On the journey drowned in September, his wife and children. A photo of the little body washed up on the three-year Aylan shocked public opinion in Europe where the refugee debate had erupted.