Home / World / Family after Taliban kidnapping back in Canada 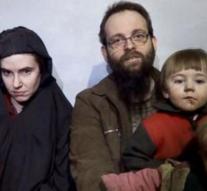 toronto - The American-Canadian family abducted in Afghanistan in 2012 is home again. Joshua Boyle, Caitlan Coleman and their three children have arrived safely in Canada, reports the Canadian government. The Pakistani army earlier announced this week to liberate the family from the hands of 'terrorists'.

The couple disappeared five years ago while backpacking in Afghanistan. They probably belonged to the so-called Haqqani network, which has ties with the Taliban. Coleman was pregnant at that moment. The children were all born in captivity.

The Pakistani army said it had come into action after information was provided by the Americans. They had discovered that the hostages had been brought to Pakistan.