Home / World / Family after fuss: no, our daughter (7) was not dehydrated 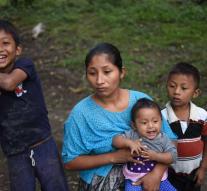 el paso - The seven-year-old girl Jakelin Caal, who died after she and her father were detained by American border agents, was healthy and had eaten and drunk adequately.

That's what the girl's family says in a statement and they deny previous reports in the media that the girl was exhausted and dehydrated by her long journey from Guatemala via Mexico to the American border.