Home / World / Families diplomats USA must be out of Venezuela 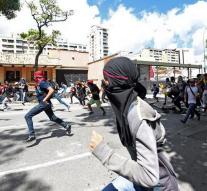 washington - The US Department of Foreign Affairs has assigned to leave the country on Thursday (local time) relatives of US government officials at the embassy in the Venezuelan capital, Caracas.

In Venezuela elections are taking place next Sunday to elect a new 'constitutional assembly'. More irregularities are expected in the country where the opposition opposes demonstrations and strikes against President Nicolás Maduro's plans.

The number of deaths since the protests started in April rose to 108, with five killings during protests during the strike on Thursday. At the 48-hour strike of Wednesday and Thursday, according to the local human rights group, Penal Forum was arrested at least 229 people.

The ministry said in a statement that for security reasons it also allowed the voluntary departure of diplomats from the US embassy in Caracas. In addition, American citizens are advised not to travel to Venezuela.

The Venezuelan government announced a demonstration ban in the run-up to the elections from Friday to Tuesday.