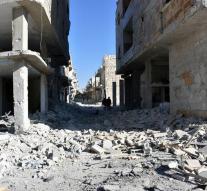 - The Syrian army on Monday in eastern Aleppo occupied the district of al-Sakhour. That confirmed the Syrian Observatory for Human Rights. The generally well-informed observatory speaks ' the biggest defeat of the rebels since 2012 '.

With the loss of al-Sakhour the opposition began a third of its territory lost since the army of President Assad on the rise in Syria's largest city. The state media in Damascus claimed the ingestion of the disputed district at night though.

The capture of al-Sakhour poses a serious strategic threat to the rebels, that their territory in half cut.

Human rights organizations report that approximately 10 000 residents have fled the area. An estimated 6,000 of them have sought refuge in an area in Aleppo that of Kurds in hands.