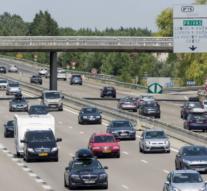 amsterdam - Nepalese who rob unhappy tourists along the French Route du Soleil. The police in the country warns of these practices of robbers, who especially hit the roads to the south. In recent weeks tourists have been raid on motorways on the Côte d'Azur and Languedoc-Roussillon and along the A13 between Paris and Normandy.

The robbers act as agents in civilians who turn tourists into cars with floodlights under the search of a search. When the men are busy with their 'research' all kinds of valuable things are robbed.

'They drive around in a car without police logo. When they see a prey, they are mostly focused on foreign tourists, they stick to a car and go behind the vehicle, 'said police chief Alain Archaimbault in the French newspaper Le Figaro. 'When the vehicle stops on the flight lane, the so-called agents bend with a flashlight in the driver's face to unscramble the car on expensive items. As soon as they have the booty, they hit the flight. '

According to Archaimbault, the fake police men are easy to recognize because French agents always carry a logo on the car and wear a uniform. Also, a policeman will never ask you to stop on the flight lane. 'Too dangerous,' said the police chief who advises people by driving and calling the police if they feel wet.