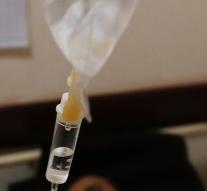 nairobi - At least 33 visitors from a trade fair in Nairobi have incurred cholera. There may be more people getting sick, a healthcare spokesman said on Saturday. Further tests must show that.

According to the Citizen TV channel, seventy attendants were infected with the cholerabacterium, including the Kenyan Ministers of Finance and Industry. That has not been confirmed yet. However, it is clear that in the capital there are now 96 choler patients in hospitals. Three people have died so far.

In Kenya, harassed by drought and lack of clean drinking water, cholera outbreaks have been more common in recent months. This results in nausea, vomiting, abdominal pain and diarrhea with a risk of severe dehydration. At the end of June about fifty participants at an international doctors conference in a hotel in Nairobi were ill.